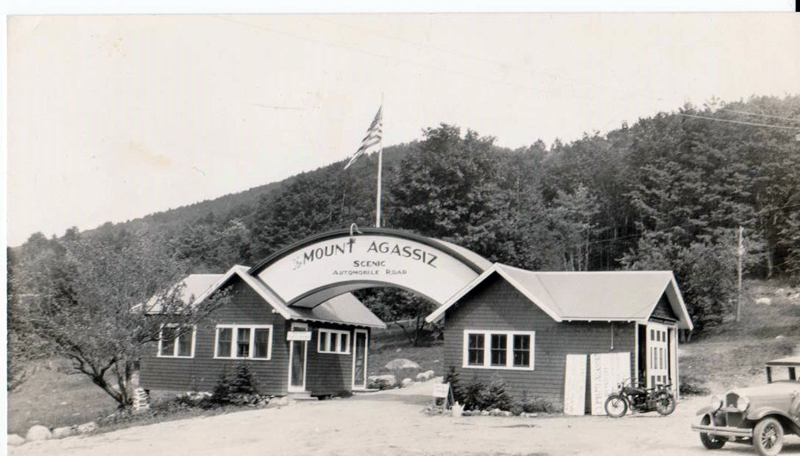 MT. AGASSIZ AND ROUND MOUNTAIN

In the 1880’s Mt. Agassiz was under the control of Milo J. Corliss who constructed a carriage road to its summit on which he erected an observatory. This mountain was formerly known as Peaked Hill, but was later named Mt. Agassiz in honor of Prof. Louis Agassiz, the celebrated Swiss Naturalist. In 1884, the observatory was rebuilt and enlarged and it commanded then, as today, one of the finest panoramas in the mountains. Three hundred and seventeen peaks scattered over three states and Canada are visible from Mt. Agassiz. This mountain has an elevation of 2,500 feet and is only a few minutes ride from Bethlehem street. Mrs. L. S. Gray once wrote and published a poem about Mt. Agassiz called “The Observatory of the White Hills.”

Mt. Agassiz was owned and run by W.S.Phillips for a great many years, being in the Phillips family until it was sold in 1944 to Abraham Polakewich. Mr. Phillips improved the carriage road and trips were made daily to the summit. These trips were made by buckboard, a low-slung wagon seating up to six passengers and drawn by two horses. The first ascent by automobile up Mt. Agassiz was in August 1910, but the auto road to the summit was not completed until 1929. Pedestrians who climbed the mountain had a choice of returning to the village either by way of the Maplewood path, Turner’s path or by the carriage road, thence by the Strawberry Hill path. Mt.Agassiz is now owned by
F. Gordon Miller of Baker Brook Cabins and passengers are carried up the mountain by the Magic Mountain Express. 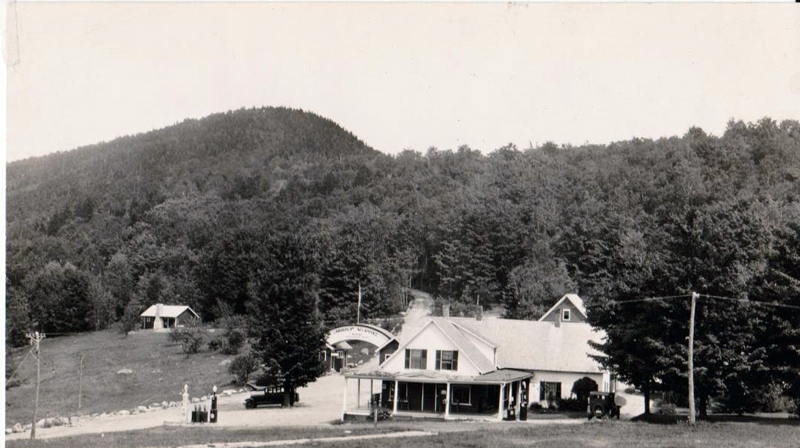 In 1894, Mr. Merrow’s attractive photographic studio was constructed on the west side of Smith’s Drug Store,harmonizing with the post office on the opposite side.

In 1879, a bridle path for the ascent of Round Mountain and the observatory on the summit was completed by Mr.Sam Varney. This path was broad and smooth and of gentle grade which made it equally easy for horses or pedestrians. The whole length of the bridle path above Mr. Herbert’s clearing was only about fifty rods. Those who preferred to ride in wagons could drive nearly to the entrance of the bridle path. Mr. Varney invited the guests at all the houses in Bethlehem to join in the opening ascent which took place in September 1879. In 1886 a fine road was made to the summit of Mt. Cleveland, (formerly Round Mountain) and a new observatory erected on the top where a magnificent view of the Gale River valley and the surrounding country was obtained. Mr. Varney, the proprietor of Round Mountain,changed the name to Mt. Cleveland in honor of President Grover Cleveland.

In the same year, Mr. Varney, being aware of the number of visitors who preferred to travel up the mountain on foot, constructed a fine footpath from the base of Mt. Cleveland to the summit. The path branched off the Mt.Agassiz road about one mile from Main street and a turnstile was placed at its commencement for the direction of travelers wishing to visit the top of the mountain. 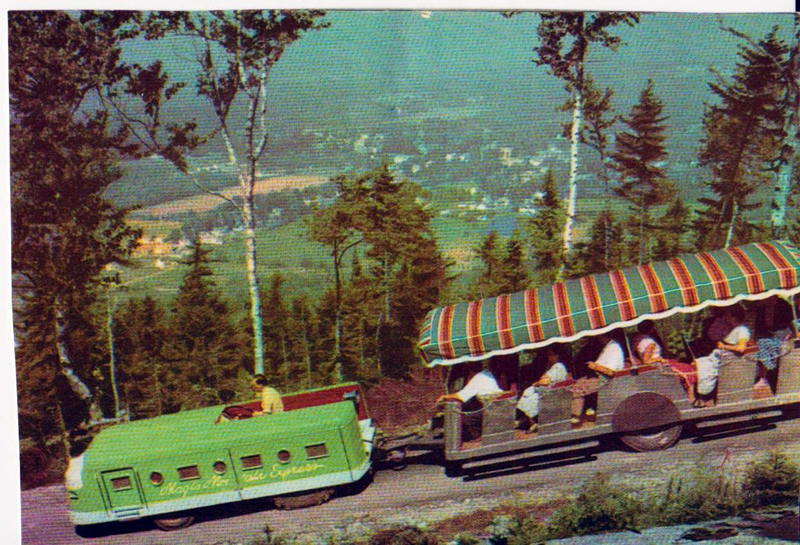 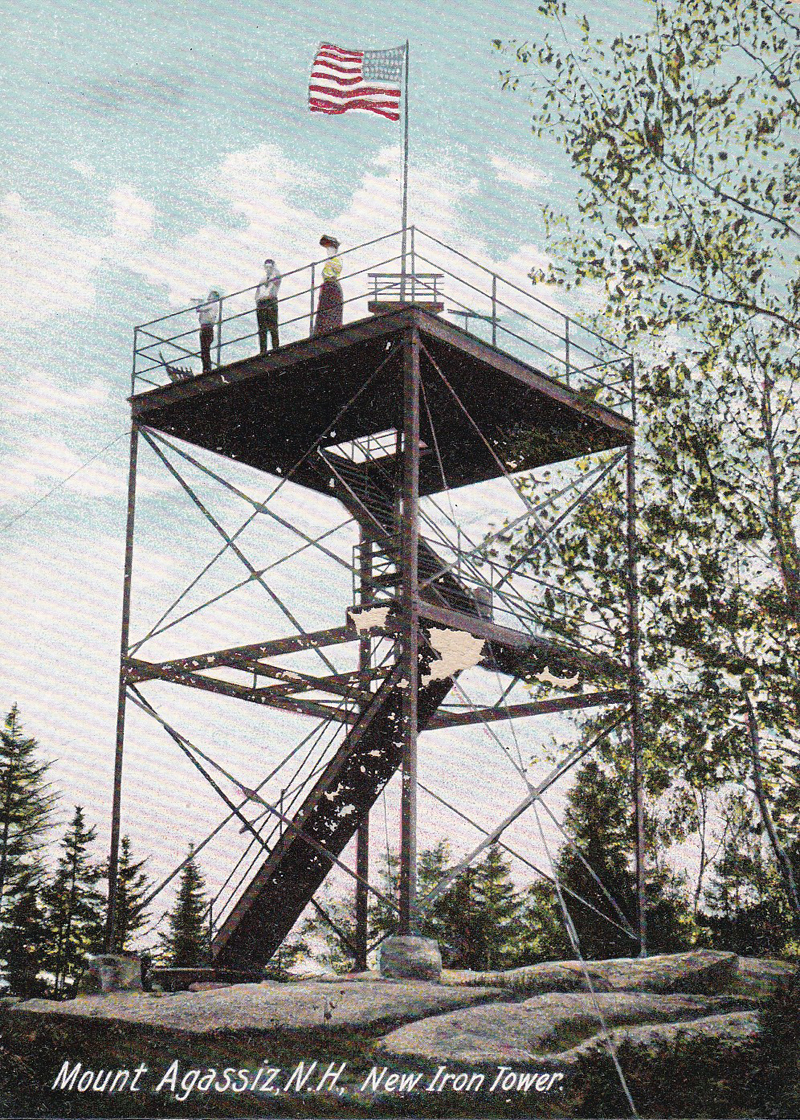 The first observatory on Mount Agassiz, formerly Peaked Hill, was erected by Milo J. Corliss in the 1880’s. Louis Agassiz, the famed Harvard professor, formulated many of his theories on the Ice Age from his research on Agassiz. 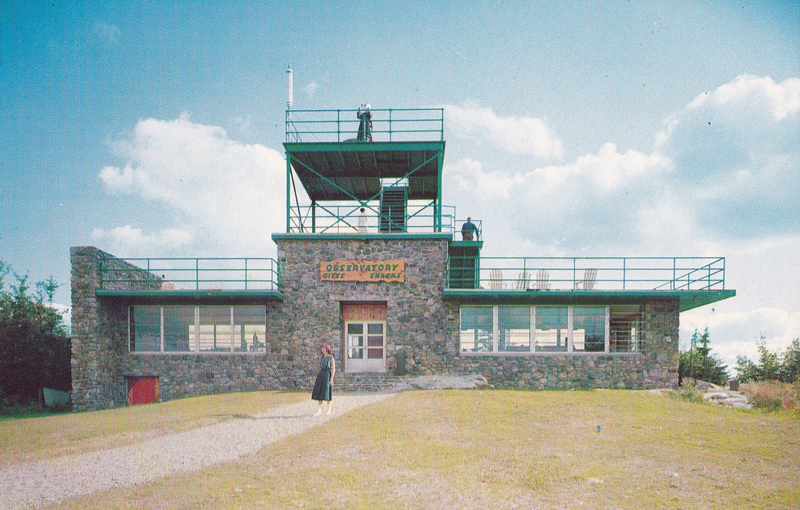 During the years, it has been an attractive site. 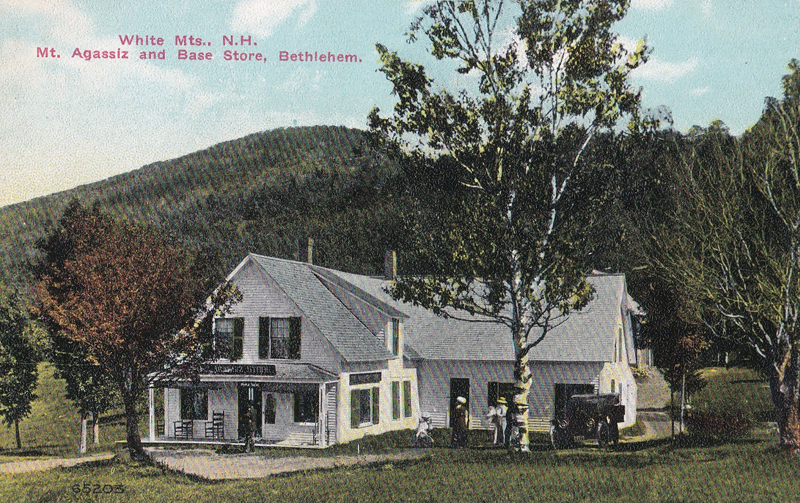 W. S. Phillips and his family ran a gift store, a sugar house,and tours to the mountain top (shown on far right).The Phillips family sold Agassiz to Abraham Polakewich in 1944. F. Gordon Miller acquired the mountain in the l950’s,improved the Observation Tower and ran his Magic Mountain Express (shown below) . This venture was later closed and in 1973, John Rolli and Richard Reinhold acquired the Mountain and are developing home sites.