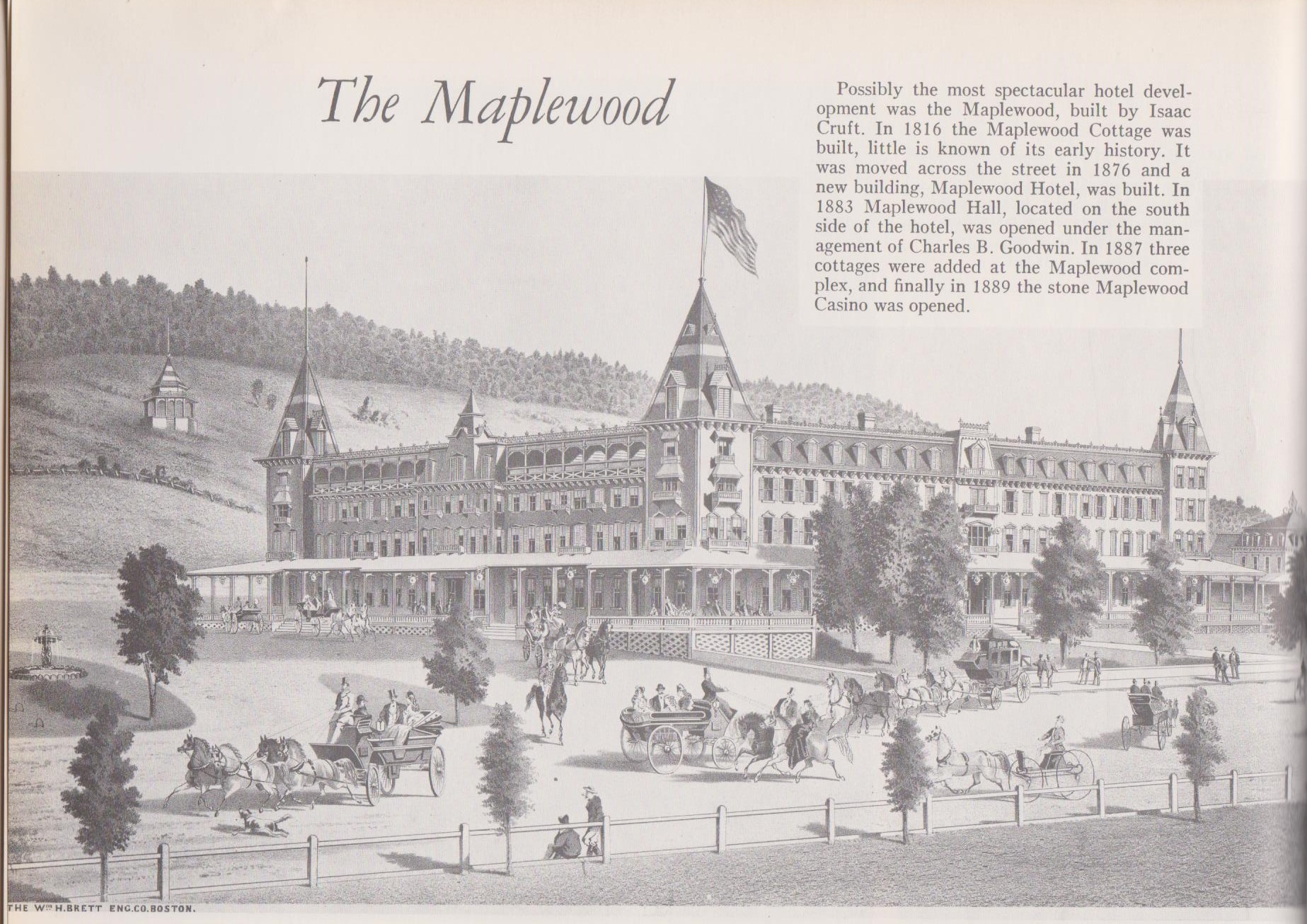 When the Bethlehem boys in blue returned from the savage Civil War they found the town much as they had left it. However, one thing had happened during the war that was to have a drastic effect on the town’s development.This event ultimately transformed our village. During the Civil War, Rhode Island Governor Henry Howard and his family were visiting the White Mountains. A runaway stage coach, culminating in an accident, resulted in a prolonged stay for the Howard family in the Sinclair House. Then the Sinclair was a small, well-kept stage tavern with a few rooms. Quietly resting in our town Governor Howard quickly understood its potential as a summer resort.

He returned summer after summer and then bought a large farm on Main Street known as the Carlton Farm. He also bought the Brooks or Strawberry Hill Farm, opposite the Carlton Farm, and built in 1873 a summer cottage for his personal use. The Howard purchase marked the beginning of a new era for Bethlehem. Prior to Howard’s arrival, tourism was not important, but his developments started a new trend which resulted in a major industry. 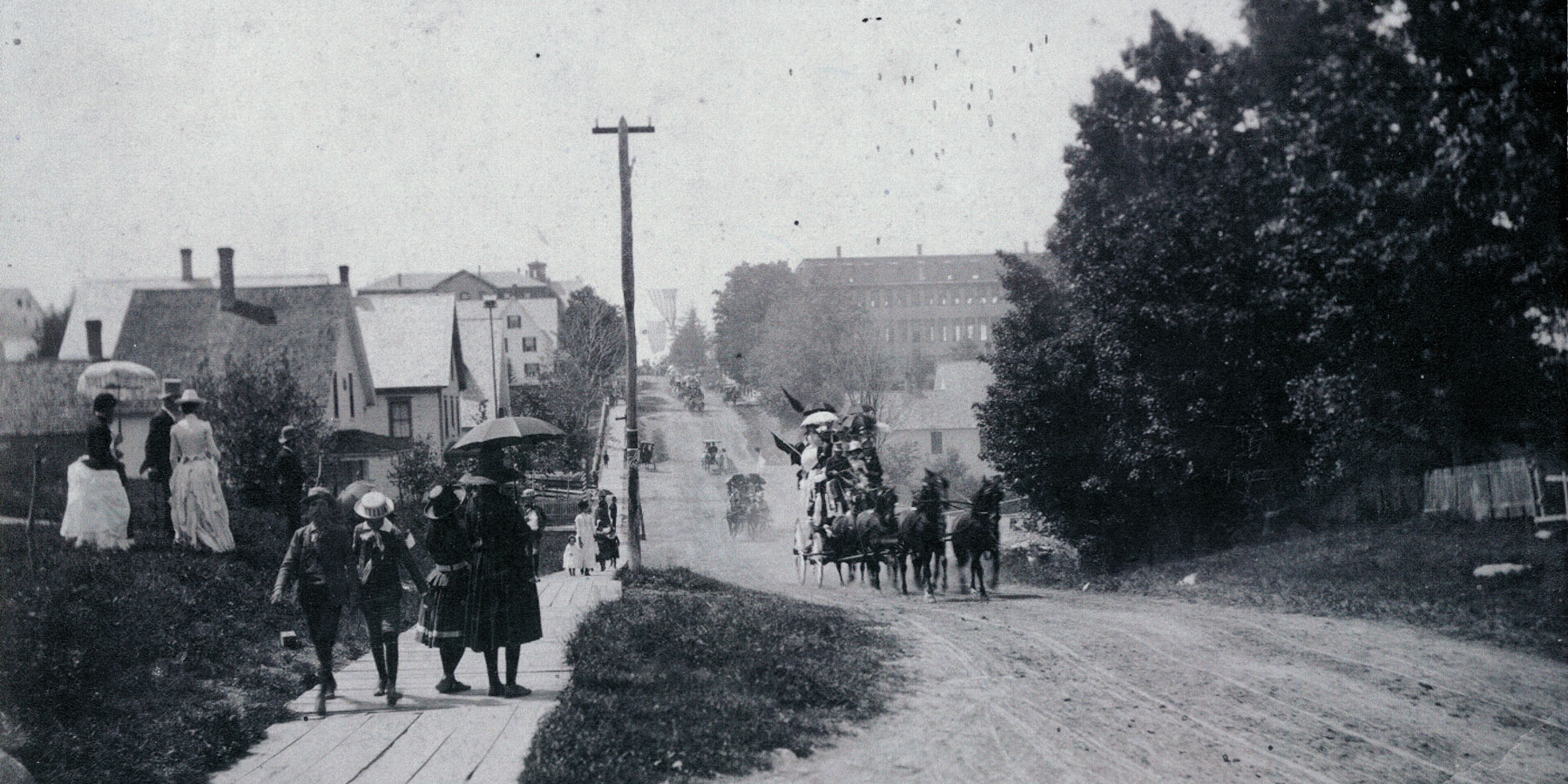 Main Street looking east in the early 1870’s before the tourist boom exploded. No shade trees, street lamps, or sidewalks greeted the returning veterans of the Civil War, but in a short time, these would be a part of Bethlehem life. On the left is the Methodist Church. On the right is the Jefferson Spooner House, now the site of the Colonial Theatre and the Alden Huntoon house, C.G. White house and store, Sinclair Cottage and Sinclair Hotel.

One of the older taverns constructed for transients was the Presby Tavern which burned in 1856. It stood opposite the present Sinclair Hotel. In 1864, James Turner expanded the family inn, started in 1807, and in 1865 John Sinclair expanded his facility which resulted in the present Sinclair Hotel. In 1853, Cyrus E. Bunker came to Bethlehem from Barnstead, New Hampshire. Originally a blacksmith, he quickly saw the benefits of the new tourist industry. In 1870, he erected the Mt.Agassiz House, the first hotel to cater exclusively to summer boarders as opposed to the transient. In 1875, Bunker exchanged the Agassiz House for land outside the village but later returned to buy the site of the Howard House which was destroyed by fire in 1874. In 1878, he erected the second Howard House which he sold in 1887 to F.E.Derbyshire. 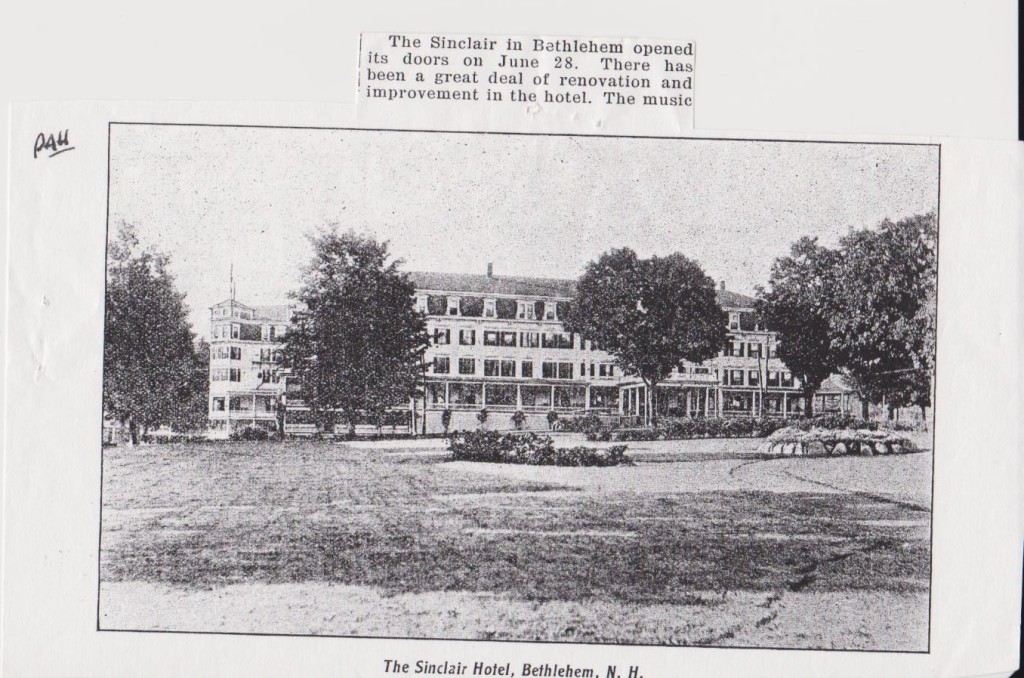 The Sinclair Hotel was built on Main Street in 1865 by John Sinclair, one of the first men to realize the possibilities of Bethlehem as a summer resort. Mr. Sinclair was a Democrat and ran for Governor in 1866, 1867 and 1868, and for U.S. Senator in 1876. During the 1880’s the hotel was operated by Mr.Durgin and Mr.Fox. Other proprietors were Mr. Dan Harrington, Mr. Will McAuliffe and Mr. Mitchinoff. Today the owners and operators are Mr. David Spiwack and Mr.Myron Herrman.

Possibly the most spectacular hotel development was the Maplewood, built by Isaac Cruft. In 1816 the Maplewood Cottage was built, little is known of its early history. It was moved across the street in 1876 and a new building, Maplewood Hotel, was built. In 1883 Maplewood Hall, located on the south side of the hotel, was opened under the management of Charles B. Goodwin. In 1887 three cottages were added at the Maplewood complex, and finally in 1889, the stone Maplewood Casino was opened.

The Maplewood Casino, which opened in 1889, contained a dance floor, bowling alleys, a theatre and facilities for the golf course. A story found in Robert Pike’s “Tall Trees, Tough Men” concerns building the foundation of the Maplewood Casino:

In the winter of 1888, Arthur Gordon of Lisbon was working in the woods as an axeman for the I.B. Andrews Company. One Sunday he was out digging spruce gum when an Indian who was working in the camp, and who had taken a liking to him, came wandering by. The red man sat down on a spruce log about fifty feet long, and the following conversation took place: Gordon, “Nice log.” Indian, “Looks good.” Gordon, “It is good.” Indian, “Maybe. No tell.” Gordon, “What’s the matter with it ?” Indian, “No tell. No put to test.” Gordon, “What do you mean?” lndian, “You go small end. Put ear close. You hear anything?” Gordon, “Yes, I hear a sound like scratching.” Indian, “The log is good.”The Indian told him the secret of how to listen to test the soundness of a log and Gor­ don promised not to tell anyone. Years later while Art was working in a sawmill in Easton for Charles Young, an order came in for a piece of sound timber 2 by 12 inches and 40 feet long for the foundation of the Casino at Bethlehem. The boss told Gordon to save such a specimen of timber when he found it. The next day among a pile of logs one such piece turned up with the right dimensions and the appearance of soundness. Several workmen were called to pass judgement upon the soundness of the log and all were in favor of using it. Then Gordon offered to try the Indian test. With Young at the listening end, he started the mysterious maneuver. Young could hear nothing, but without divulging his secret, Gordon declared that in his opinion the log was unsound . The boss then ordered the men to saw it. About six feet from the butt they came onto a two-foot piece of rotten wood in the heart of the log. The Indian trick eventually worked on a proper log, for the Casino still stands.

While the Maplewood was probably the most spectacular of Bethlehem’s hotels, it was by no means the only large hotel. Beginning in the early 1870’s, the town was clearly establishing itself as a tourist center. Each year hotels were built or expanded and local natives took in additional summer boarders or built summer cottages. The Park House was erected by Charles Bunker in 1876, at the head of Park Avenue which was laid out that same year. In 1878 P.W. Ranlett left the Sinclair House to own the Park House which he renamed Ranlett’s Hotel. In 1880 Mr. Ranlett built an attractive cafe by the side of the hotel. Years later this cafe; was moved to the eastern end of the Lewis block and used as a meat market by Harry and Fred Lewis. In the late 1890’s the Ranlett Hotel was purchased by I.A.Taylor and renamed the “Altamonte.”

Other interesting hotels developed before the turn of the century included the Centennial, now the Arlington; the Alpine House; the Upland Terrace, now Chase Golf and Tennis Camp; Sunset House, now the Bethlehem Inn; the Prospect House and the East View, later the Lyndhurst and then Park View.

By the mid-1870’s Bethlehem was definitely known as a tourist town. Over 4,000 persons a year came for the summer and more were to come each year. The Statistics and Gazetteer of New Hampshire for 1874 noted: “The inhabitants are generally devoted to agriculture and keeping summer boarders… a prominent resident of this town says: “The future prospects of Bethlehem are very flattering, owing to the great rush of summer tourists. The number who stopped here in 1872 from one week to three months, according to a careful estimate, was four thousand”. Large boarding homes are being erected every season and are filled . The large influx of people through the summer affords the farmers a fine opportunity to market their surplus produce at advance rates. 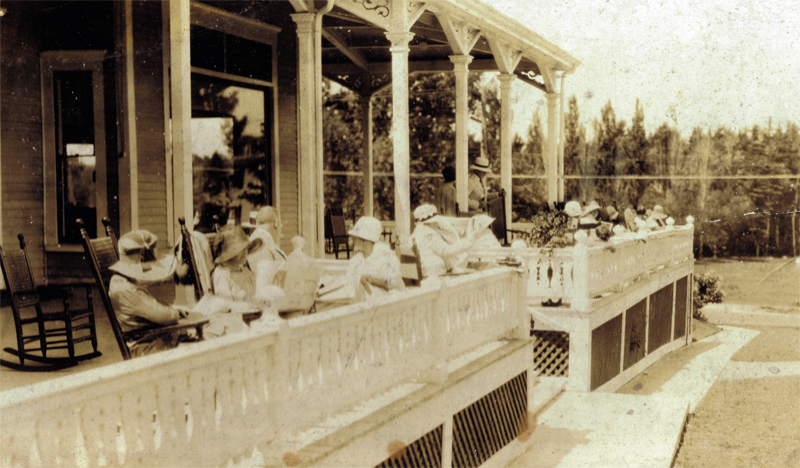 Visitors spending the morning rocking on the Maplewood porch in the 1890’s.

Bethlehem House, located on Congress Street, opened in 1874 and was owned by Willard McGregory. Some of the proprietors were N.W. Cheney, George Coburn, E.P. Marston, H.E. Richardson and J.H.A. Bruce. It burned down about 1908.

The Rev. Simeon Bolles book, “The Early History of the Town of Bethlehem” provides the following information on hotels ten years later in 1883: “Maplewood, one of the largest and most handsome buildings of its kind about the mountains, accommodates 500 guests, Maplewood Cottage, 100 and Maplewood Hall, 150. These three houses are all under one ownership. The Sinclair House covering the site of the original establishment – the first of its kind in Bethlehem accommodates 300 guests. Blandin House, H.C. Clark, proprietor, 30 guests; Centennial House, H.W. Wilder, proprietor, 60 guests; Mt.Agassiz House, H. Nye, proprietor, 60; Mt. Washington House, C.L. Bartlett, proprietor, 60 ;
Prospect House, G.W. Phillips, proprietor, 80; Ranlett’s Hotel, D. W. Ranlett, proprietor, 75; Turner House, J. N. Turner & Son, proprietors, 75; the Highland House, the Bellevue, the Alpine, the Uplands, the Bethlehem House, the Howard and the Strawberry Hill House each accommodate from 50 to 150 guests. There are numerous smaller houses at which guests can secure good accommodations at reasonable rates… Taking everything into consideration, Bethlehem offers more advantages to the summer tourist than almost any place on the western continent.”

Isaac S. Cruft built the Maplewood Hotel in 1876 and then in 1880 developed the Cruft Block(left) . The building at one time had five floors and many felt, probably unjustly, Cruft built the fifth floor to destroy the view of the mountains from the Sinclair Hotel. The fifth-floor roof was removed in 1893 because it swayed dangerously in winter storms. The block was the center of town activity and contained through the years a jail, post office, offices for the White Mountain Echo, general store, library, dance hall, lodge rooms and drug store. In 1911, George T. Cruft (below), the nephew of Isaac, sold the block to Myron Jackson who ran a general store until he sold the building to Philip Lyster in 1955. The building was also used by H.& H Outdoorland, a Trustworthy Hardware store managed by Ralph Holmes. George Cruft gave the town the memorial fountain on Main Street in 1899 and its current town building in 1912. 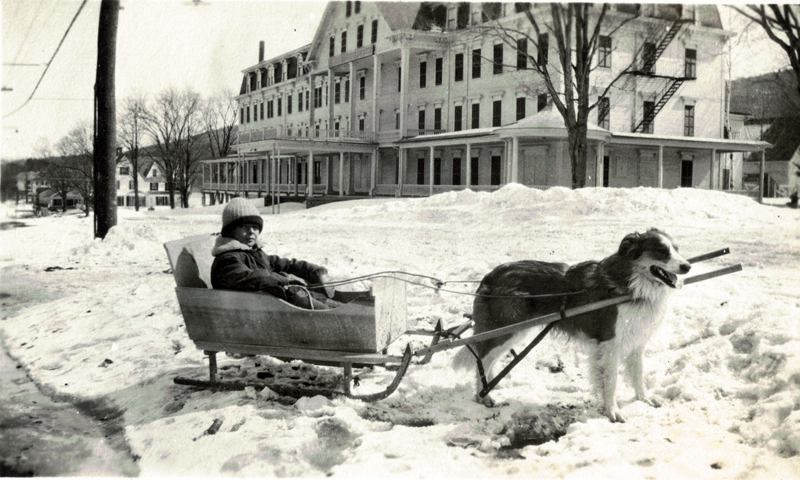 One of the largest Grand Hotels in Bethlehem was the Sinclair Hotel. It was built by JohnH. Sinclair, who recognized the possibility of boarding businesses for summer visitors. Sinclair initially built a tavern, with several rooms, in 1857. It was located on Main Street, on the corner of Agassiz Street, (now RT 142). Sinclair enlarged the hotel several times, beginning in 1861, adding to the size of the structure. The property was sold in 1870 to J.A. Durgin and D.W. Ranlet. Ranlet’s interest went to A.B. Richardson and then to Warren Fox. The hotel was expanded by the partnership of Durgin & Fox until 1888. The guest capacity reached 350. Later owners were Daniel W. Harrington and William McAuliffe. In 1908, they formed the Sinclair Hotel Company. Thomas P. Conley later owned the property in the 1920’s. During these years, guests would come to the hotel to enjoy the clean air in Bethlehem. They spent their days sitting on the large porch surrounding the front of the hotel, men reading newspapers and women sewing and talking to friends. They played croquet and took coaches, later autos, to local attractions. Meals played a prominent role, with large servings of numerous menu choices for Breakfast, Lunch, and Dinner. In the evening, they played cards or enjoyed a three piece band and dancing. During the modern era, the owners of the New Agassiz Hotel, Louis Michnoff and Dora Spiwack, purchased the Sinclair Hotel in 1937. The property now included the Sinclair Hotel, the Agassiz Hotel, and the adjoining Fairlawn Hotel. The business began to cater to the Jewish clientele. The hotel changed hands on more time, in 1946. It was then owned by Myron Herrman and David Spiwack. The hotel attracted guests from Boston, New York City and Montreal, Canada. Guests would stay for days or weeks at a time, enjoying sports activities and entertainment, “Broadway Shows”. Several famous comedians and singers got their start on this circuit. Three large meals were served a day. The hotel continued to attract Jewish clientele. The Sinclair Hotel closed after the 1974 season, a victim of rising costs and declining reservations. The property and contents were sold at auction in 1976. The hotel was destroyed by fire on Oct. 24, 1978.