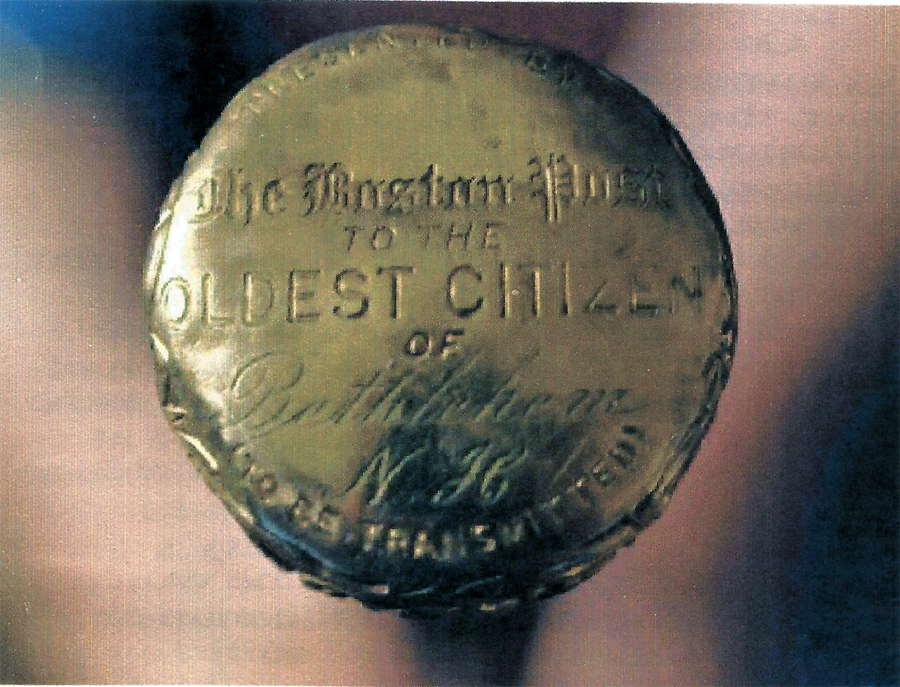 On August 2, 1909, under the savvy ownership of Mr. Edwin A. Grozier, the Boston Post engaged in its most famous publicity stunt. The newspaper forwarded to the Board of
Selectmen in 700 towns* (no cities included, although some current day cities were towns in 1909) in New England, a gold-headed ebony cane with the request that it be presented with the compliments of the Boston Post to the oldest male citizen of the town,to be used by him as long as he lives (or moves from the town), and at his death handed down to the next oldest citizen of the town. The custom was expanded to include a community’s oldest women in 1930. The cane wou1d belong to the town and not the man or women who received it.

The canes were all made by J .F. Fradley and Co., a New York manufacturer, from ebony shipped in seven-foot lengths from the Congo in Africa. They were cut to cane lengths, seasoned for six months, turned on lathes to the right thickness, coated and polished. They had a 14-carat gold head engraved with the inscription,  Presented by the Boston Post to the oldest citizen of (town’s name)- To Be Transmitted.

In 1924, Mr. Grozier died and the Boston Post was taken over by his son, Richard, who failed to continue his father’s successfu1 venture. The newspaper went out of business in 1957 due in part from competition from other newspapers, radio, and television.

Many towns in New England still carry on the Boston Post cane tradition with the original canes they were awarded in 1909. As years went by some of the canes were lost, stolen, taken out of town and not returned to the Selectmen or destroyed by accident.

A great story of lost and found

BETHLEHEM
Dick Robie has spent more than 10 years looking for something that’s been missing for decades – until just recently when he became the youngest recipient of the Boston Post Cane.

“It’s been 35 or 40 years since it’s been seen,” said Mr. Robie, who is a member of the Bethlehem Heritage Society.

An article placed in the New Hampshire Union Leader by Mr. and Mrs. Robie lead to the discovery of the missing cane.

The town of Bethlehem is one of 700 communities in New Hampshire, Massachusetts, Maine and Rhode Island that were presented with the gold­headed, ebony cane from the old Boston Post newspaper in 1909, according to the Maynard, Mass. Historical Society, which keeps track of the canes.

In many New Hampshire towns, the tradition of presenting the cane has been retired. However the tradition of honoring the oldest citizen will carry on in Bethlehem as a replica of the cane was made for presentation. The original is on display at the Bethlehem Heritage Society.
Read the full story by Lorna Colquhoun