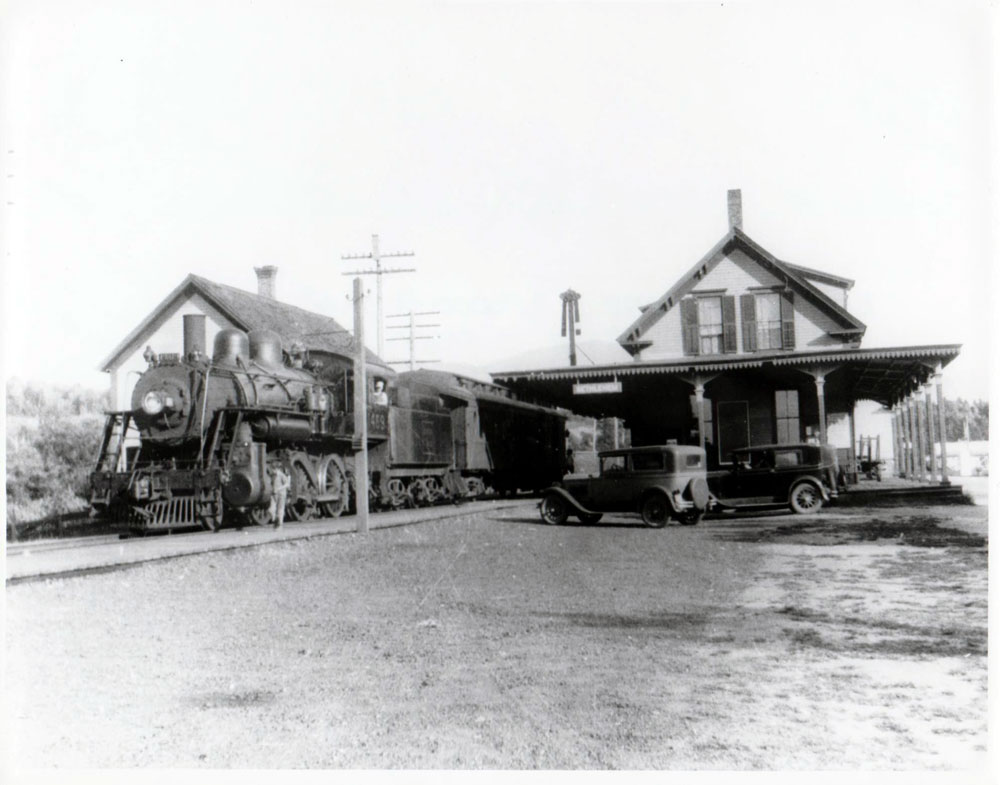 During the earliest years of Bethlehem settlement, the steam cars came no nearer than Concord. Four-and six-horse coaches made daily trips, during the summer, between Crawford and Plymouth. In 1867, the Bethlehem Junction and Fabyans railroad was built and in 1879, the Bethlehem and Franconia Notch railroad from Bethlehem Junction to the Profile House was opened. This branch of railroad was nine and one-half miles long. The narrow gauge railroad from Bethlehem Junction to Bethlehem Street was opened for business in July 1881. The “Echo” was the name given the locomotive that drew the first passenger train over the new Bethlehem branch railroad, a distance of about three miles. This branch was discontinued in 1924 and the station building was remodeled into a cottage. Trains ran to the Junction to meet the Portland, New York, and Boston trains during the months from June to October.

During the height of the summer season, as many as eight and ten trains came into Bethlehem daily. There were three railroad depots in town: one at Bethlehem Street, one at the Maplewood and one at Bethlehem Junction. For several seasons, Mr.J.Gannon was baggage master on the Bethlehem branch and Mr. Warren McGregor and Mr.James Atwood were station agents at 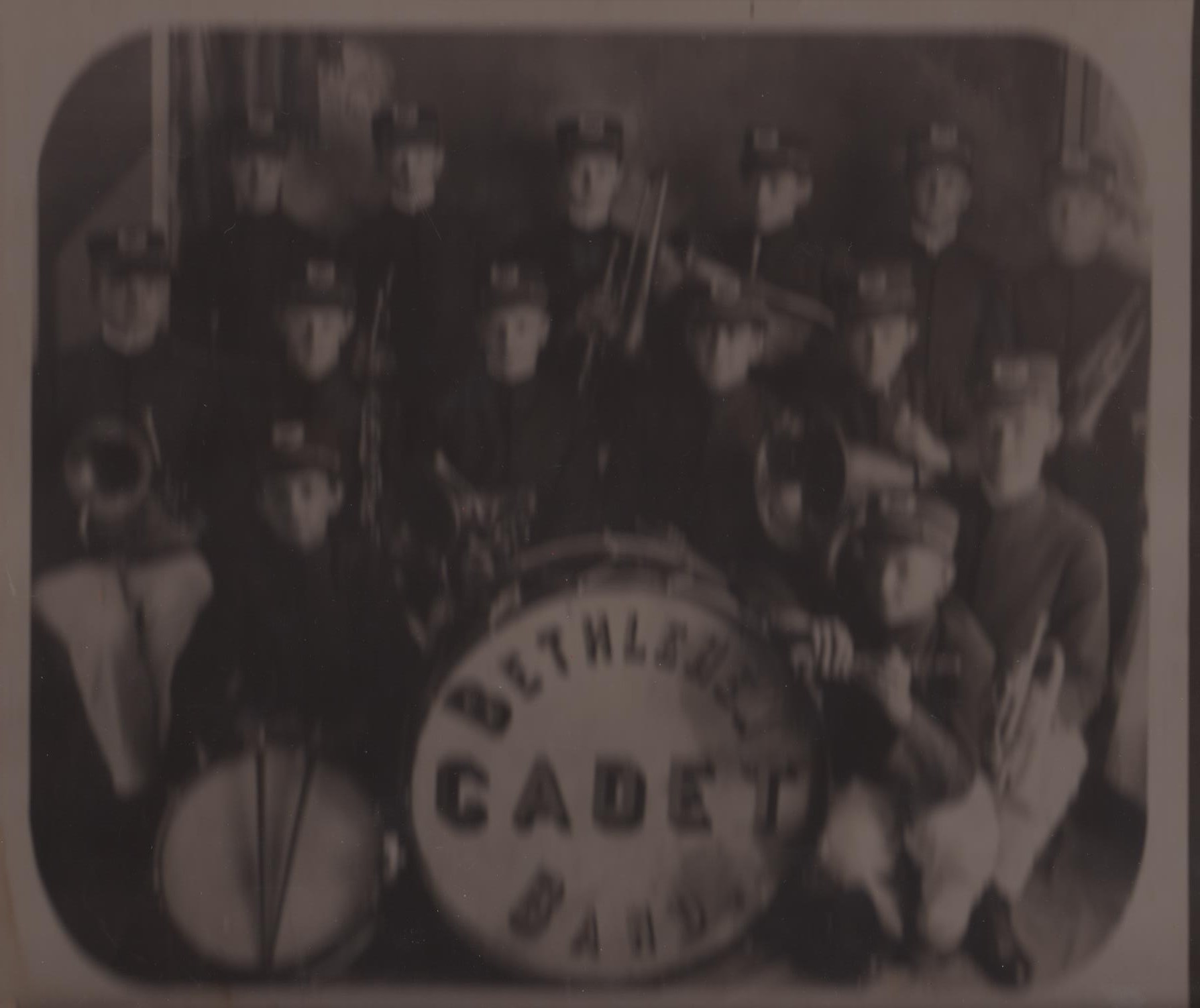 Taken at the railroad depot about 1905, dressed in their new uniforms furnished by the Board of Trade, the band awaits the arrival of the Governor of New Hampshire and his staff to escort him to the Sinclair Hotel. The members of the band had dinner at the Sinclair that night and gave a concert on the piazza in the evening.

Bethlehem and Maplewood respectively. All trains were met by the stage coaches to carry the guests to the various hotels and boarding houses. In those days, people came to Bethlehem in June and stayed through the summer, well into the month of September. In 1896, electric lights were added to the railroad depot, and in 1891, the covered portion of the depot was extended to accommodate a larger number of stages and carriages awaiting the arrival of trains.
One night in September 1893, burglars visited the Bethlehem railroad depot.They entered the depot through a window that they broke in order to reach the window catch, and afterwards broke open the money drawer. There were only a few coppers and nickels in the drawer which they left, doubtless disgusted at the smallness of the amount. The entrance must have taken place after a severe storm of that night as fresh marks of carriage wheels were left on the road. The burglars also apparently attempted to break into the postoffice as next morning one of its windows was found open, but they had not entered, having most likely been scared off by approaching footsteps.

In 193S, L.E. Cole of Bethlehem and Littleton purchased the old Boston and Maine railroad station at Bethlehem Junction and used the material from the station to construct a new home on the site of his farmhouse that was destroyed by fire.

Among the distinguished guests who have visited Bethlehem are Presidents Hayes, Taft, Harding and T. R. Roosevelt. Famous authors and artists include Cora Harris, Helen Hunt Jackson, Thornton Burgess, Frederick W. Kilbourne, James B.Connally, Will Carleton and Robert Frost. President Grant also visited Bethlehem and in August, 1869, was given a wild ride from Bethlehem to the Profile House. This trip was supposed to take two hours but the driver, Edmund Cox, with his spirited horses, completed the trip in fifty-eight minutes. The following Christmas the President sent Mr.Cox, the driver, a fine driving whip.

Before the trains ran to Bethlehem and after, there was a mail stage that ran daily, summer and winter, between Bethlehem and Littleton. It left Bethlehem at 8 a.m., 9:15 a.m. and 1:15 p.m., returning from Littleton after the arrival of the 11:48 a.m., 3:11 p.m. and 5:06 p.m. trains. The stage also met the 7:50 p.m. express train from New York. Passengers leaving the train at Littleton and coming to Bethlehem by stage, saved about fourteen miles of railroad travel and two changes of cars and reached Bethlehem twenty minutes in advance of those going round by Bethlehem and Wing Road Junctions. The stage fare from Littleton to Bethlehem was seventy-five cents one way and one dollar from Bethlehem to Littleton and return. Some of the early mail stage drivers were: B.C.Spooner, Henry C. Clark, Henry Miller and Fred Gardner.